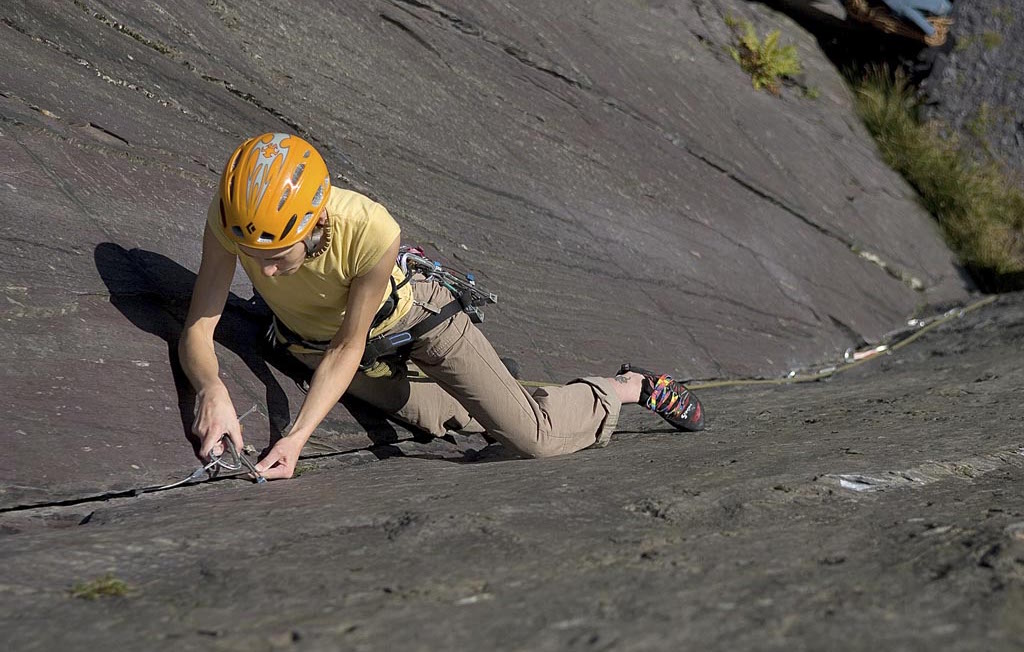 Your lead climbers life is literally in your hands. There is a big difference between belaying someone on a top rope and belaying a lead climber. When you start to belay a lead climber you need to have someone with experience close at hand, backing you up. A good belayer will pay constant attention to the climber, watching for upward movement so they can pay the rope out at the right time. If the climber is out of sight the belayer has to look at the curve of rope going up the crag and as they see the rope start to straighten or even feel the rope tighten slightly, they need to pay out more rope.

Lead belaying is often a combination between paying out the rope, and then taking the rope back in. This is due to the lead often placing runners above their head meaning that for a moment they are on a mini tope rope, so the belayer need to be able to see or sense this from the movement of the rope in front of them. As well as taking in and paying out the rope either as with top rope belaying or lead belaying the belayer, can help minimise the amount of rope they have to pay out each time by making a step forward or back, it is literally just a step though.

Attaching the belay device to the rope loop adds a small amount of extra dynamic stretch into the system as the knot tightens. This will reduce the impact force on trad runners or when sport climbing. When belaying a lead climber being tied into the end of the rope makes it impossible to lower the climber of the end of the rope, a common mistake when sport climbing on long routes.

At anytime the belayer needs to be ready to lock the rope off, as the climber could fall off without any warning at all. Although the leader might communicate their situation with a selection of climbing calls, ‘Slack’ – means they want some slack paid out, ‘Watch me’ – means they want you to be really attentive as they are at a tricky move and might fall. ‘Take’ – means that they have either fallen off or are about to, or they are exhausted and unable to go any higher and want to rest on the rope.

The forces involved in a leader fall are far greater than when top rope climbing, as such vigilance is needed at all times. If the climber is a long way above the runner then there is often an opportunity to take in a quick armful of rope and step backwards to take in some rope and reduce the length of fall, however as soon as the weight start to come on the rope the rope needs to be locked off, and the chances are you’ll have to hold on tight and expected to be lifted off your feet.

In terms of positioning yourself it is very important that you stand as close to the bottom of the route as possible. There are two reason for this first if the climber falls off and you are stood a distance from the base of the cliff you will get dragged across the ground, and secondly and more importantly the rope will pull outward and potentially upwards on the first runner out. This can rip the first runner out leading to a cascade effect pulling each runner out until the top one. Not a situation you want to witness.

A further concern for the lead climber is reaching the first gear on a pitch, as such it will be necessary to spot the climber on the first moves until they get a runner in. There is advice on this on the following section on safe bouldering.

Learning to belay a lead climber

There are various way to learn to belay a leader, it is probably best done indoor or on a sport climb as it is a more controlled environment. To start with you can place some slings over some holds on a low level traverse and practice belaying someone close to the ground.

To start with the leader should only attempt route that they are confident they can complete without falling, only after a period of consolidation should you consider moving onto harder climbs. A some point it will be bene cial for the belayer to hold a small lead fall. The leader needs to be con dent in the belayer and the belayer needs to be backed up, by practicing indoors you remove the need for the leader to judge whether the runner will hold when they fall.

These progression are also great for the rst time leader as it allows them to progressively understand the added risks of lead climbing. The safety of the leader is mainly reliant on their ability to judge how good the runners are and whether or not they are likely to hold a fall. Judgement which comes with instruction and experience.

Before leaving the ground it is both the leaders and the belayers respon- sibility to check the both the harnesses are done up correctly, that both leader and belayer and tied into the rope correctly and that the belay plate is threaded correctly and connected to the rope loop made where the belayer has tied in. Attaching the belay to the rope loop rather than the harness belay loop adds a small amount of extra stretch into the system when the knot tightens if the climber falls and by tying into the end of the rope it becomes impossible to pay out more rope than you have to the leader.

The leader then climbs the route, placing runners along the way.

At the top of the pitch the leader needs to place the rst anchor in the belay and clip it as a runner whilst they place at least one other anchor. Only when they have tied into the anchors and adjusted them to get into a good position to look down the pitch they have just climbed should they shout

“SAFE” down towards the belayer.

Then the belayer takes the rope out of the belay device, and when the rope is free shouts “OFF BELAY”.

The leader then places the belayer (now the ‘second’) on belay, and shouts down “ON BELAY, CLIMB WHEN READY”.

Now the second can unclip from their anchor (if they are on a multipitch route) and shout up “CLIMBNG” as they start to climb, the leader then con rms this by shouting “OK”.

At crags by the sea or on windy days it becomes very hard to communicate between leader and second. Here you might have to create you own series of communications based on a number of tugs on the rope, or alternatively small radios are become popular.