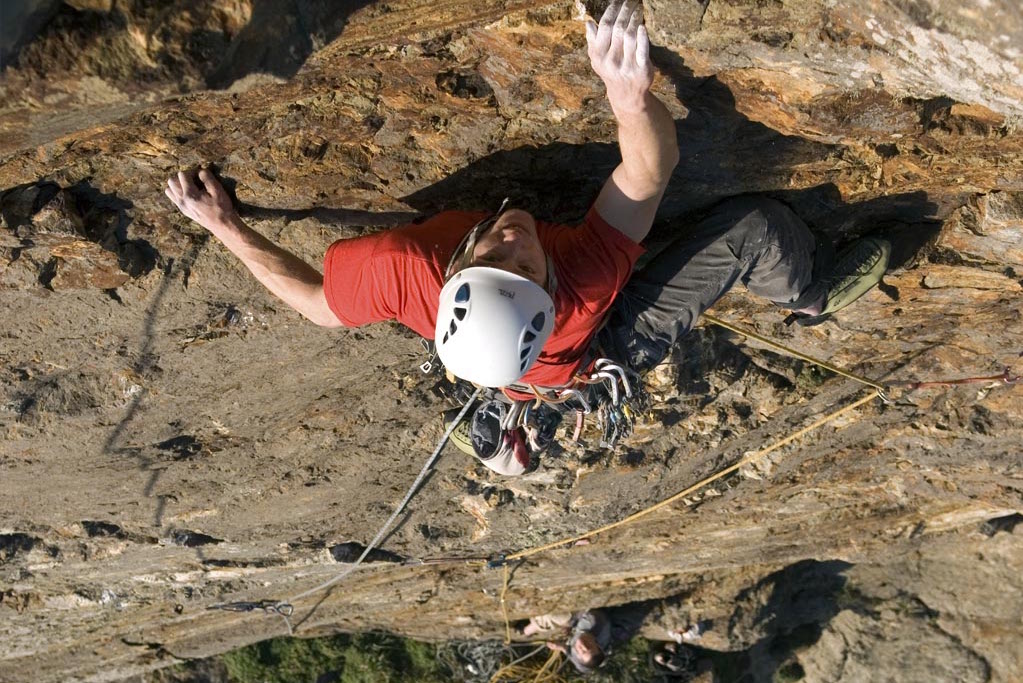 Whilst not essential, wearing a climbing helmet is a very good idea. A crag may not appear to have much loose rock but there may be some hidden blocks up on ledges waiting for a passing climber or a rope to knock it over the edge. A climber above you could simply drop a piece of climbing gear. Should you fall, a helmet will help to protect your head if you hit the wall or deck out.

Any helmet is better than none at all

Old arguments of heavy cumbersome helmets that were impractical, simply don’t stick anymore and whilst the lighter the helmet, the less protection there is, they all reach UIAA guidelines, so offer better protection than none at all.

The helmet you feel comfortable in is the best helmet as you are more likely wear it all the time. Discomfort may tempt you to remove your helmet, but here is a tale that might make you rethink that decision.

‘I once was one of the rst climbers on the scene of a nasty accident where a climber had tumbled down 50 metres down a descent gully. He had quite neatly clipped his helmet to his harness at the top of the climb. When he was airlifted to hospital they discovered he had fractured his skull in the tumble and took months to recover. What would have happened if he had been wearing his helmet?’

There are three main type of helmets nowadays. The first is a hard shell helmet made of either polycarbonate, fibreglass or carbon fibre. These helmets offer the best protection against falling blocks as they try to deflect rocks and have the highest ballistic rating (impact force from a rock). They tend to be heavier though and as such have fallen out of favour to a certain extent.

The second type are super lightweight polystyrene helmets that have been moulded. They resemble cycle helmets but have been tested to climbing standards and past. Whilst they have a lower ballistic rating they are so light you can forget you are wearing them. Some of them look better than the classic dome shape of the hard shell helmets.

The third kind is a king of hybrid, where by there is a thinner hard shell and some polystyrene. Meaning you get a little benefit from the shell but the helmet is still light.